Are some of your Mobsters on the outs with the Godfather? If you’re on Facebook, you can invite them back into the game with The Godfather’s Absolution and earn yourself some sweet rewards in the process!

The Godfather's Absolution incentivizes players to bring back old Mobsters to Mob Wars: La Cosa Nostra. When you send The Godfather's Absolution the player that receives it will get some rewards as soon as they come back to the game to help them jump right into gameplay. Based on how many Gamer Points they earn through their next four seasons you can both earn Weekly rewards with the possibility for a bonus reward at the end of this period. See the info in-game for more details about the Weekly and Bonus rewards.
Where to Start

If you are eligible you will see a new tab on your Profile called "The Godfather's Absolution". Click on the "Tell Me More" button to see specifics of the rewards available and to start sending Absolutions.
How to Send

Once you have opened The Godfather's Absolution menu you will see your Candidate List. Choose from any of these candidates to send an Absolution to which will show up on their side as a Facebook request. Once an Absolution is sent this Mobster, they will be moved into the Pending tab where they will remain until they rejoin the game or five days pass.
How to Track Progress

If you have any "Active" Absolutions you can track your Mobster's progress by clicking the Active tab. Here you will see a week by week breakdown of their Gamer Point progress. At the end of each season, rewards are able to be collected with the Bonus reward becoming available at the end of the fourth season since your Mobster rejoined. The amount of Gamer Points needed to gain a reward for the first season is scaled based on when your Mobster joins. For example if they rejoin on a Saturday, then the Gamer Points needed to complete that week will be significantly lower than it would be if they rejoined at the start of a season. 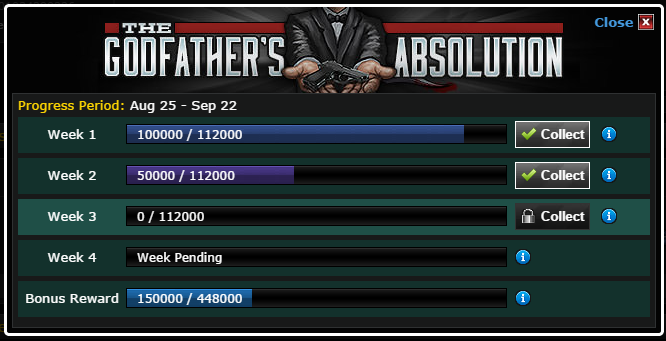 On the other side of this your Mobster who has rejoined Mob Wars: La Cosa Nostra can see their own progress by going to their own Profile and looking for the "The Godfather's Absolution" tab. This will show their week by week Gamer Points progress as well as their progress towards the bonus rewards. Your rejoined Mobster will also be able to collect rewards at the end of each season and the Bonus at the end of four seasons.